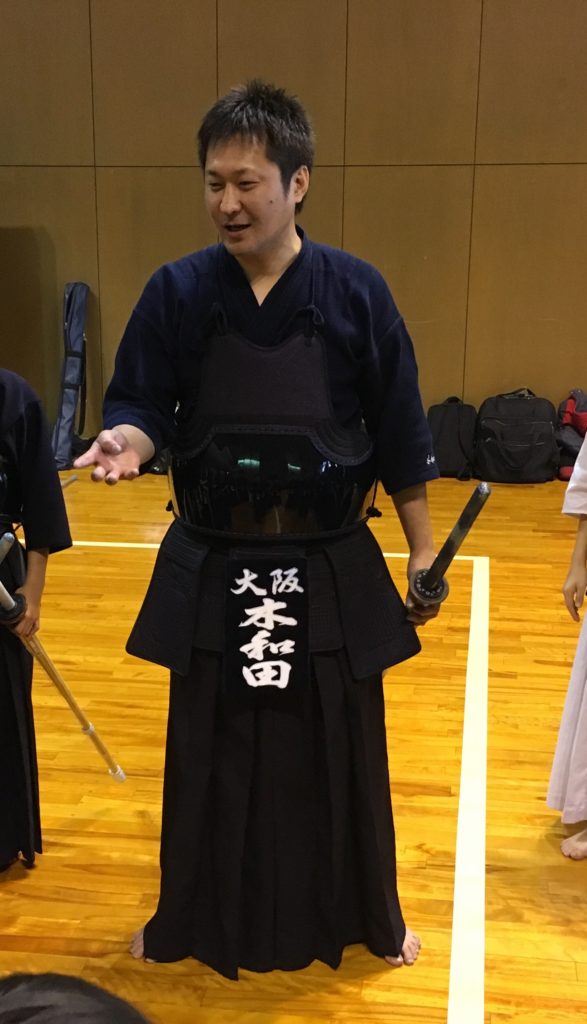 The trigger of starting of Kendo

Writer：Thank you for coming today. At first, can you tell me why did you start to practice Kendo? Mr Kiwada：When I was 7 years old, I started to practice Kendo. The reason why is I was a mischievous boy. So my parents and my relatives were worried about me and then they thought Kendo is good to correct my personality and manners so they decided to make me practice Kendo. My hometown was on the countryside so I didn’t have a lot of choices. Speaking of sports, there were only baseball,tennis and Kendo. My aunt was a coach of boy’s baseball team so I said that “I want to be your team member” but he said that “you will disturb teamwork and harmony so you can’t”. So I started to practice Kendo. Writer：I can’t image it. Mr Kiwada：Besides, I quit Kendo Club once when I was a 1st junior high school student. I was in what you call a rebellious phase. So I never practiced Kendo for half a year when I was a 1st junior high school student. Writer：Why did you come back to Kendo club? Mr Kiwada：My junior high school Kendo club coach was a man of integrity. He asked me that “Kiwada, can you participate on the tournament once? Because our club doesn’t  have enough members” to make me return Kendo club. Yes, I know that the members were enough but I thought  if my teacher insisted, I should participate only once. Then my teacher made me a Taisho. Writer：How was this tournament? Mr Kiwada：Me and the others were very surprised because I beat the last champion and I became champion. Even if I didn’t practice. Writer：How surprised things! Mr Kiwada： I was a mischievous boy so I was scolded by everyone. But when I became champion, it was my first time that teachers, parents and other people praised me. It was a pleasure to me so I decided to practice kendo hard. Writer：It is a good story.
スポンサードリンク

From university to Police officer

Writer：I know that you graduated from Chuo University(中央大学）. Can you tell me why you selected Chuo University? Mr Kiwada：Because I got a recommendation from Chuo University. When I got the recommendation, I was ranked 7th or 8th best among the players but I defeated every new members and I got 2th place before I entered the university. After the match, I was appointed to be the sub-captain. Writer：After graduating university, you got employment at Osaka police. Did you have some reason you selected Osaka police? Mr Kiwada：Because I hoped that I want to be the No.1 Kendo player in Japan and Mr Ishizuka Yoshifumi 8 dan(石塚美文）who was a Shihan(師範＝the top teacher) invited me to Osaka police. Writer：Can you tell me about the training regimen of Osaka police Kendo club? Mr Kiwada：Anyway, it was too hard. It was very hard training that I had not experienced before. The first year and second years I couldn’t remember what I did during training time. I always felt “Phew,I’m finally done”after finishing Friday’s Keiko.

Writer：How many years did it take for you to get your achievement？ Mr Kiwada：At first I took 2 years until I participated at the some tournaments. There was a Kinki area police kendo tournament in my first year but sure I couldn’t participate in it. It was my first time to be manager. I took the place for being a standby for players and bring beverages for players. Until that time, I had never dropped from regular. And then, other prefecture’s same ages players already participated. When I saw it, I felt really miserable. Sure, Osaka police members are stronger than other prefectures. But players who are in their first year can’t participate in competitions. So me being a 1st year officer cant join the competition and that made me fell miserable. Writer ：I can’t believe it such things when I see you now. After that, what did you do to be strong? Mr Kiwada：At first, my body power was weaker than my senpai so after practice, I went to gym for body building. And then, my Judo players friend who works at Osaka police office taught me a lot of ways to have a stronger body. Writer： What a great obsession for victory. I can image your remarkable efforts made you all Japan champion.